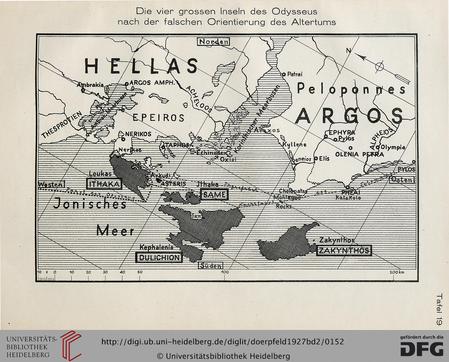 In Homers Oddessy, several passages suggest that it was possible to get to Ithaca on foot.

Here is one example:

The sentence, "I hardly think you came this way on foot," implies that it was possible to get to Ithaca on foot.

As noted above, Lefkas was connected to the Acarnanian coast by a stone bridge making the island accessible by foot.

If Ithaca were an island that was not accessible by foot, there would be no need to say, "I hardly think you came this way on foot," why state the obvious.

ANCIENT WALL OF THE CITY OF JERUSALEM - LEFKAS/ITHACA/AEGIALIA

In Homer's Odyssey, there is a geographical description of Ithaca and Same:

There should be at least one rocky island between Ithaca and Same with two harbors.  Same should be located South of Homer's Ithaca where Telemachus  would arrive from South-West Peloponnese (Aegialia). Based on the above information, Wilhelm Dörpfeld in his essay "Alt-Ithaka: Ein Beitrag zur Homer-Frage" proposed that Lefkada is Ithaca and Same is present-day Ithaca.

​It appears that the name of the island Ithaca was intentionally switched to Lefkada in order to conceal the real position of the real Jerusalem and the real story of the Holy People, the Aegialian Pelasgians.

The information presented on this website is not intended to harm anyone, nor impose, incite, convert, or encourage division, extremism, racism, anti-Semitism, hate, or violence, but reflect gnosis salvation of humanity and the path of esoteric enlightenment.
Nor is this website designed to disregard the Rule of Law or any institution that belongs to the alleged kingdom of Uranus and Titaea, i. e. the Christian Church, including all European royal families, Law Courts, the aristocracy, fraternal organisations, and the directors and shareholders of all corporations
Those who disrespect the Rule of Law and are racist, antisemitic, and use violence, harm, force, or illegal means to make a political statement or corporate change are not associated with Kopsidas or this website.
Kopsidas CONDEMNS ALL FORMS of racism, anti-Semitism, hate, evil, terrorism, and violence.
Kopsidas respects all the religions and people of the world.
May all the people of the earth live in peace, love, and harmony.
Peace and Love to All the People of the Earth.​​​
------------------------------

Having walked around the ancient city of Lefkas myself, one can't help but notice an ancient sanctuary on the top of a hill. Today the hill is known as Koulmos.

If the ancient city on Lefkas is not called Nirikos, then what is it called?

Let us investigate the salt pans of Lefkas, as this provides us with a vital clue.

Located east, outside the town of Lefkas, and at the foot of Koulmos hill where the ancient city is located are the salt pans of Lefkas.
Salt was valuable in ancient times and was known as "white gold," Lefkas was a gateway and made it possible to ship "white gold" all over the ancient world.

These ancient and natural salt pans supplied a great quantity and quality of salt. The seawater evaporated, leaving the salt at the bottom of the pan. Interestingly, the king of ancient Ithaca was Laertes. Laertes was considered a sibling of the god Pan. The word ἅλς means salt and sea, and this is where the phrase salt pan is derived. The god Pan was also known as Aegipan. Aegis also means sea and salt. The word Aegean is derived from Aegis. The word Panagia (Greek: Παναγία) means Pan+agi or Agipan. Panagia is one of the titles of Mary, mother of Jesus, used especially in Eastern Catholicism and Orthodox Christianity.

Now, let us come to the word Jerusalem. What does the name Jerusalem mean?

Etymology is the study of the origin of words and the historical development of their meaning.

Here is the etymology of the word Jerusalem, also spelled, Ierusalem, Hierusalem, from Latin Hierosolyma or Hierosalem (Hiero+salem).

The word Jerusalem means holy, temple, sanctuary, sun, salt, and Aegis. There are salt pans located at the foot of the ancient Holy city of Lefkas, i.e., Ithaca, and there is also a temple or sanctuary along with natural springs.

I believe that the ancient city on Lefkas, i.e., Ithaca (Aegialia), is the ancient holy city of Jerusalem) as purported by Anna Komnene's book "THE ALEXIAD OF ANNA COMNENA."

The name (H)ierosolyma), contains the letters of Roma in sequence: (H)ieROsolyMA). The city of Rome was named after Roma, the daughter of Telemachus, the son of Odysseus and Penelope from Ithaca (Aegialia). Jerusalem (Middle East) takes its name from (H)ieROsolyMA) Ithaca, Aegialia. Titus Tatius, a Sabine (Aegialian Pelasgian), was the first king of Rome/Roma.

It also appears that Lefkas, i.e., Ithaca, was first known as Aegialia (Aegis).

The Aegialian Pelasgians were an autochthon race of people with no admixture. The original race.

This revelation on the location of the actual holy city of Jerusalem being in Lefkas, i.e., Ithaca/Aegialia throws doubt on the validity of the collection of religious texts, writings, and the scriptures sacred to the Jews, Samaritans, Christians, Rastafarians, and others. These religious texts are collectively known as the Bible.

It also questions the history of the Jews/Israelites/Hebrews and Jesus Christ, and throws a spotlight on the validity of the European royal families., i.e., the Catholic Church, which they call the kingdom of Uranus (Ouranos).

So the actual holy city of Jerusalem is in Aegialia, not the Middle East, and the holy people are the autochthon Aegialian Pelasgians, not the Jews, i.e., Semites.

The Titans, Olympians, Atlanteans,,Greeks, Israelite's, Jews, Arabs, Vikings, etc., are a crossbreed between hominids from Africa and autochthon Aegialian Pelasgians.

Aegiochus (Aegio+Chus) was a pet name of Zeus. Aegio means Aegis, and Chus is a pet form of the male given name Jesus.

If you hold a title of citizenship and believe in one of the Abrahamic religions, then welcome to the story of your enslavement.

If you believe that Jerusalem is in Lefkas, i.e., Ithaca/Aegialia, which it is, then welcome to the path of your liberation.

Why the deception? I'll get into that on another page.

Blind faith can be blinding.

Keep in mind when looking at Dörpfeld's map that the Peloponnese was first called Aegialia, and Hellas was first known as Pelasgia. The original inhabitants of Aegialia Pelasgia were the Aegialians Pelasgians.

Further down the page is Wilhelm Dörpfeld's map depicting the ancient city of Nirikos, scanned pages of THE ALEXIAD OF ANNA COMNENA, a photo of the salt pans of Lefkas, and a photo of the old wall of Jerusalem (Ithaca/Aegialia) built by the Aegialian Pelasgians.

Using Google Earth one is able to locate the two harbors mentioned by Homer on the island Arkoudi which is the island Asteris.​

SCANNED PAGES OF THE ALEXIAD OF ANNA COMNENA 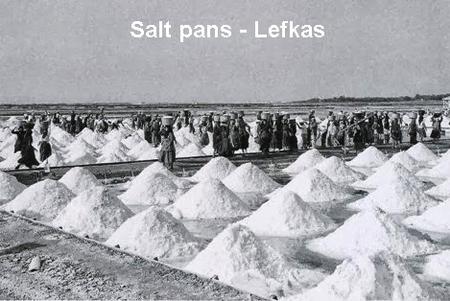 TOP VIEW OF THE ISLAND OF LEFKAS, i.e., ITHACA/AEGIALIA 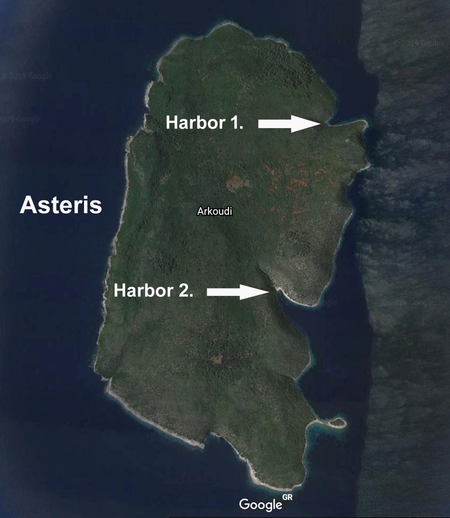 THE REAL ANCIENT CITY OF JERUSALEM AND THE REAL HOLy PEOPLE

The real city of Jerusalem. Have you been deceived by the kingdom of Uranus (Ouranos)?

Can we trust history, i.e., the study of past events, particularly in human affairs, based primarily upon written documents? The answer to that question is yes and no.

The following is an attempt to set the historical record straight. It appears that there may be some funny business concerning the biblical texts of the Abrahamic religions. I shall throw the spotlight on the city of Jerusalem.

Today, Jerusalem is a city in Western Asia on a plateau known as the Judaean Mountains. It lies between the Mediterranean and the Dead Sea. Jerusalem is central and considered holy to the three major Abrahamic religions—Judaism, Christianity, and Islam.

But was Jerusalem first situated in another location, I mean before Jerusalem in the Middle East? The answer to that question appears to be in the affirmative.

OK, so where was the original location for the city of Jerusalem?

Let us start our investigation for the actual city of Jerusalem with Anna Komnene.

Anna Komnene was born on 1 December 1083 and died in 1153; She was a Roman princess, scholar, physician, hospital administrator, and historian. Her uncle was George Palaiologos, who fought against the Normans (Vikings) in the Battle of Dyrrhachium, near present-day Durrës (Albania) in the ancient region of Illyria. She was the daughter of the Roman Emperor Alexios I Komnenos and his wife, Irene Doukaina.

THE ALEXIAD OF ANNA COMNENA was an account of Anna Komnene's father's reign, Alexios I Komnenos.

Anna Komnene refers to the ancient city of Jerusalem in her work "THE ALEXIAD OF ANNA COMNENA."

So here we have a legitimate historical account of the location of Jerusalem given by the Roman princess Anna Komnene. She locates the ancient town of Jerusalem on the island of Ithaca in the Ionian Sea.

Lefkas, also spelled Leukas, is an island located in what is now known as the Ionian Sea and was connected to the Acarnanian coast by a stone bridge making the island accessible by foot. (Coordinates: 38°43′N 20°39′E)

On Lefkas, there is a very ancient city. There is the widespread belief that the ancient city in Lefkas is called Nirikos, but this is, in fact, not true. Wilhelm Dörpfeld's map clearly shows that ancient Nirikos is located opposite Lefkas.

Dorpfeld claimed that "Nirikos" was part of the Acarnanian coast near the village of Plagia, which is opposite Lefkas, i.e., Ithaca.

Dorpfeld believed that the nearby island of Lefkas was Homer's Ithaca, whereas the island known as Same in ancient times is the present-day Ithaca.